As central banks adopt aggressive measures to stabilize prices, at the risk of causing an economic slowdown, cash should be considered a good hedge.

As the first quarter of 2022 draws to a close, it seems essential to take stock of the forces in place that could shape the contours of financial asset returns.

The Russian invasion of Ukraine has created considerable uncertainty. By themselves, geopolitical events do not tend to have a large long-term impact, but they do lead to periods of short-term market declines. What is particularly worrying today is the supply shock coming from the commodity complex that followed the invasion. Indeed, Ukrainian crops are now under threat and international sanctions against Russia have severed the oil and gas supply chain. These are factors that cannot be managed by monetary policy but rather by diplomacy and trade treaties. Historically, big rises in energy (50% higher than a fundamental valuation would recommend) have led to recessions. But today, it is not only energy prices that are rising, but more than 70% of commodity markets, including foodstuffs, which is particularly worrying in terms of social cohesion. Among all the components of the BCOM index, the median year-over-year price advance is 122%, the highest level in 30 years, and more than 70% of them have increased over the past six months to reach levels similar to those of 2008. In graph 1 shows the magnitude of these increases. If we compare the average quarterly performance of various commodities during inflationary shocks between 1990 and 2021 and their performance in the first quarter of 2022, the situation seems truly exceptional. For example, energy prices have increased nearly 7 times this average and agricultural prices about 3 times. Such a sustained rise in energy prices can be destructive to corporate growth and earnings.

Figure 1. Average quarterly performance during inflation shocks between 1990 and 2021 vs performance in the first quarter of 2022 of various commodities

Growth conditions remain favorable thanks to the monetary and fiscal stimulus measures taken following the Covid epidemic. However, these measures caused a demand shock that triggered a surge in inflation. Therefore, the combination of a demand shock and a commodity supply shock causes central banks to focus on the price stability part of their mandate. By adopting a restrictive policy, they will try to control demand in order to slow inflationary pressures. However, they risk stifling growth in the process, increasing the risks of a stagflationary regime within a year or two. Chart 2 illustrates the evolution of our monetary policy surprise nowcaster and the evolution of the monetary scenario in the United States between mid-February and the end of March. The nowcaster is clearly trending higher, suggesting an increase in the likelihood of a monetary policy surprise. Moreover, since mid-February, the Fed has been increasingly hawkish, rapidly converging with market expectations. In short, inflation is today’s challenge, which opens the door to monetary policy mistakes that could trigger a slowdown, creating an explosive cocktail that could well end in stagflation. 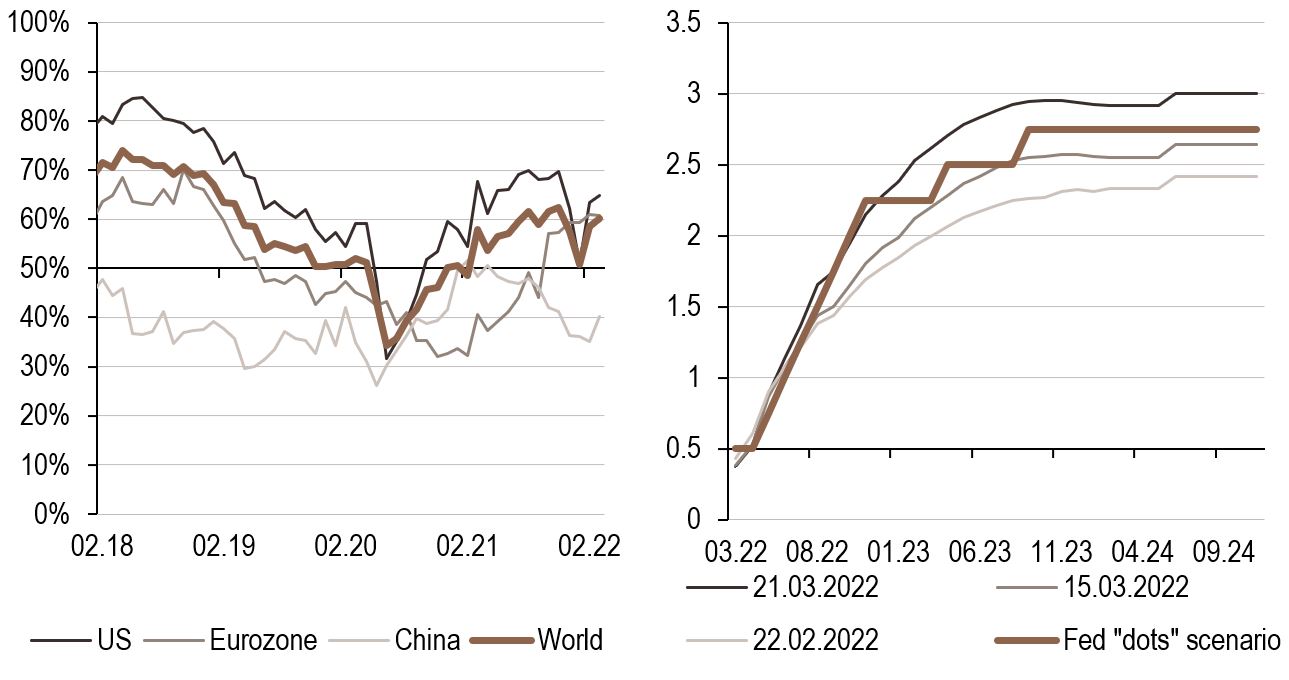 Should stagflation materialize, cash is historically one of the best portfolio hedges available. In addition, we believe that exposure to commodities (inflation risk) and sovereign bonds (recession risk) should be maintained in order to cover a stagflation scenario. Finally, if central banks are able to successfully untangle these tangles, equities should be in for a soft landing. The current risk is that the drug kills both the disease and the patient.

Clearly, investors must remain diversified with a certain intellectual flexibility allowing them to temporarily take refuge in cash. It remains the simplest way to diversify the usual sources of diversification.