The economic sanctions imposed on Russia by the West in retaliation for the invasion of Ukraine could prompt central banks to rethink their foreign reserve policy.

On February 14, the government of Justin Trudeau decided to impose financial sanctions on certain activists of the freedom convoy, a popular movement which blocked Ottawa to protest against the obligation to vaccinate against Covid-19. A few days later, Canadian police announced that more than 200 bank accounts linked to the protest movement had been frozen. This is an unprecedented event in a developed country with an unequivocal message: if the government does not like the way you use your money, they can decide overnight that you no longer have control. on your assets.

Two weeks later, a confiscatory decision of a completely different dimension was born: in retaliation for the invasion of Ukraine, the West decided to block the assets of the Russian Central Bank. Indeed, the United States, Canada, France, Italy, Germany and the United Kingdom want “to prevent the Russian Central Bank from deploying its international reserves in a way that undermines the impact of the sanctions. “. Half of the 630 billion dollars in reserves that could have been used by the Russians to defend the ruble (in free fall) and to recapitalize the local banks (cut off from SWIFT) are not accessible today in Moscow.

This is the first time that a G20 central bank has been sanctioned in this way. Russia is now a pariah of the international financial system, just like Iran, Venezuela or North Korea.

The Russian central bank holds more gold than US dollars.

This extraordinary decision is likely to call into question the international monetary system which has been in place for more than 50 years now. As recently recalled by Gavekal, the financial order as we know it rests on the following foundations:

The hoarding of international currency reserves is a cornerstone of the current monetary system. World currency reserves have literally exploded over the past twenty years, from 1.8 trillion in the early 2000s to 12.8 trillion at the end of last year. These reserves are mainly held in the form of US and European government bills and bonds, with the US dollar still accounting for almost 60% of these reserves and the euro around 20%. As the chart below shows, global reserves stand at almost 15 trillion, as central banks also hold other assets such as gold – we’ll get to that.

Even if this system has created many excesses and disparities, it has worked rather well since the end of Bretton Woods, and in particular for Americans who have thus found a way to finance their twin deficits. 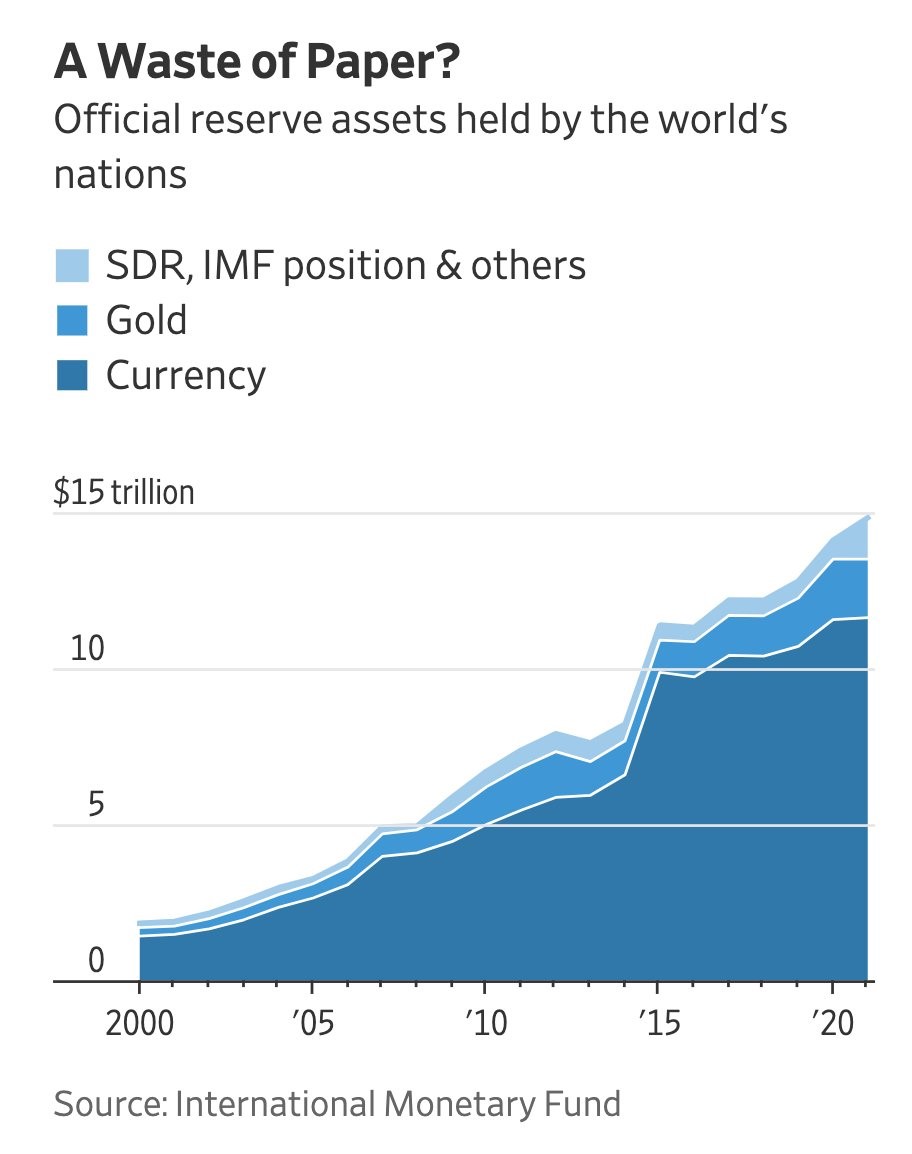 Towards a new paradigm?

But for many observers, the fact that the West has chosen to freeze reserves in dollars (and in euros) will encourage some central bank governors to rethink the logic of building up reserves but also the merits of investing part of the balance sheet in US Treasuries. With negative real yields (-5% for the 10-year), US bonds have no other reason for being than the security they offer their holders. But if Washington can decide overnight to freeze dollars that a sovereign country thought were its own, the central bank governors of China, Pakistan, India, Turkey, Kazakhstan or Saudi Arabia aren’t they going to be incentivized to sell some or all of their dollars and diversify their holdings into other assets? Of course, the circumstances linked to this unprecedented decision by Western countries are quite exceptional and are not supposed to be repeated (at least we hope so…). However, this freezing of the assets of the Russian central bank could have the following consequences.

Which asset(s) to replace the dollar?

While many countries are probably tempted to reduce their dependence on the dollar and the euro, they nevertheless face a major problem: how and in what asset to reinvest the trillions of dollars currently held as a reserve?

Until the Ukrainian crisis, the euro was the main alternative to the dollar. But the alignment of the Europeans with the Americans during this conflict is not likely to reinforce the attraction of the euro for the States which want to free themselves from the type of risk discussed above.

The yuan is also one of the alternatives, and all the more so as China weighs ever more heavily in trade (see Allnews article “Chinese debt, a safe haven?”).

Gold is of course a natural candidate. Central banks have also accumulated an additional 463 tonnes of gold in 2021, bringing global gold reserves to around 35,600 tonnes, their highest level in nearly 30 years…

Another limitation of gold: it is not so simple to store and transfer it.

These limitations are all elements that lead some central banks to consider cryptocurrencies such as bitcoin as a possible reserve currency: limited supply (see Allnews article “What is rare is expensive”), decentralization, ease of storage and transferability are all elements that make bitcoin a candidate as a reserve asset for central banks. But this asset also has limits: market value even lower than that of gold, legal risk, high volatility, etc.

Even if the reserve diversification movement is underway, dedollarization cannot take place overnight. But it is very likely that the composition of central bank balance sheets will now be scrutinized even more closely by economists and governments alike, as the macroeconomic and financial consequences of a reallocation of assets could be considerable.